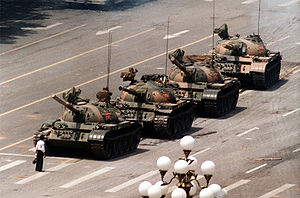 This is, of course, just a still image.  In 1989, the World Wide Web barely existed, you couldn’t edit video on your laptop, and YouTube, Facebook, and Google Maps would not exist for more than a decade.  But in important ways, this single image prefigured the power of new media — it was reported from a wide variety of sources (and shot from several angles), it went viral quickly (in 1989 this took the form of being on the covers of hundreds of newspapers), and because it spread so quickly, was extrmely difficult to regulate.

Of course, the Tiananmen movement failed.  20 years later, we have tools that this movement did not have.  Millions of people – your clients, members of your community, friends and relatives – have stories as dramatic as that of this young student.  We have the technology to take images like this and turn then into successful movements, by integrating them in a disciplined and strategic way into advocacy efforts.  We can animate them, bring them to life through video, allow others to comment on or improve them, and spread them around the world in seconds, all in the service of winning legal cases, and improving our clients’ and communities’ lives in concrete ways.  This is N-Map’s goal.

There are thousands of people today who exhibit the same courage displayed by this unknown protester.  Let’s give the world the great honor of learning about them, hearing from them, and seeing them.