“As human rights defenders, we are not heroes, but intense citizens.  Activism is living in an intense manner.  But it is not enough, we have to implement a strategy.  And film is just that: passion combined with strategy.” 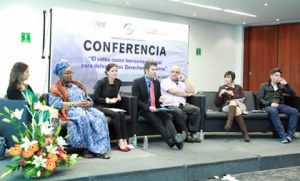 Last week, N-Map’s Adam Stofsky and Abby Goldberg participated in the 6th International Human Rights Film Festival of Mexico (@dhfestmex, #DHFest), where we were honored to present our video advocacy work at the Mexican Senate and Abby served as one of six Festival Judges. Sponsored and organized by the Fundación Cinépolis, the Festival promoted the discussion of how film can increase interest and awareness of human rights issues in Mexico. The Festival directly reached more than 5,000 people!

It was an auspicious beginning. Upon arrival in Mexico City, major protests had broken out in the area near our hotel; a colleague had actually emailed us to warn us about likely violence and make sure we were safe.  Pulling up to the Hilton, we had to cross a barricade put up to protect the hotel during the protests.  It was a crude reminder of the topic we were there to discuss, human rights, in a country where these rights are deteriorating in front of our very eyes. Indeed, the Festival could not be more timely and necessary in a country where accountability for widespread impunity for human rights violations has made little progress.

N-Map Presents at the Mexican Senate

We were honored by the Festival’s invitation to share N-Map’s unique approach to the use of video as a tactical tool for human rights advocacy and law at the Mexican Senate. The presentation and panel discussion, “Video as a Legal Tool to Defend Human Rights,” showcased our strategic legal use of film in a global context and a panel of Mexican activists who applied the presentation to their own work with video in Mexico.

N-Map presented several examples of our use of video as a legal tool, including: Fight the Outbreak Against Cholera in Haiti (Short Piece, Long Piece); Wheelchair Accessibility in Georgia: The Long Road Ahead (Social Ad); A New Way to View Slums in Lagos; and Breaking the Wall of Impunity in Uruguay.

N-Map was joined by Mexican human rights lawyer Jesus Robles Maloof, who works with Propuesta Civica, (and on behalf of N-Map in Mexico), Regina Tamez, the Executive Director of GIRE, and Flavio Florencio, Director of Viva Mexico and the Film Festival’s Director.

N-Map’s Deputy Director, Abby Goldberg, Serves as One of Six Judges of the Festival

Abby and the other judges reviewed four films, three of which take place inside Mexico.  The films directly tracked the three issues that N-Map has focused on this past year: the forced disappearance of migrants Entre Serpientes y Escaleras, the admissibility (and reliance on) confessions under torture in the Mexican criminal justice system Bajo Tortura, and finally, Revolucion de los Alcatrazes addresses the issue of indigenous language rights. The jury also reviewed Benghazi, a film about an independent news station in Libya that helped lead to Gadhafi’s demise.  Ultimately, Revolución de los Alcatrazes was chosen as the winner with Benghazi receiving a special mention.

We are inspired by the resilience, strength, and bravery of the many individuals we came in contact with during DHFest week. These collaborations help us to share new ideas with the field, and create space for N-Map to more effectively do its advocacy work.

DHFest provided another reminder for why we do what we do. Blogger Heba Afify from Egypt said that the Egyptian Revolution had failed, in part, because of the lack of strategic coordination and the need for greater rights education among Egyptian citizens. Alice Nkom, the first woman lawyer from Cameroon and LGBT rights advocate, said the use of media would enable her to achieve greater results in defending LGBT rights and allow the LGBT community to be less isolated in her country.  The Encuentro de Blogueras event, a Q&A session held after the screening of “Forbidden Voices,” brought together some of the most eloquent and outspoken women straddling the realms of the virtual and the real, including one of Abby’s personal heroes, Yoani Sanchez (Cuba).

The event proved a critical learning experience for N-Map, where tough questions on the universality of self-expression, human rights, and the challenge of bringing together local community with governing bodies were met with equally thoughtful answers.

We look forward to continued collaborations in Mexico, with the Cinepolis Foundation, and with the incredible future partners we connected with as part of the experience.

Abby as a Judge: