In Chiatura, Georgia, miners commute to the cliff top manganese mines in Soviet-era cable cars. As we boarded one of these cars during N-Map’s January shoot, our crew surveyed it anxiously. The cable cars are ancient and rusty—a wonder that they still function.

As the car steeply ascended, our interview subject, Shota Gaprindashvili, spoke with pride about his hometown and its distinguished Soviet history. He was taking us to see the former Pioneer Palace at the top of the cliff, where youth gathered during the Soviet days. Shota is the founder of an advocacy NGO and one of his main priorities is encouraging youth activism on environmental issues.

Manganese mining collected a serious toll on Chiatura and the surrounding region. The river water is black, the air is dirty, and rate of cancer high. The mining company remains loathe to invest in the community or in new infrastructure, while the Georgian government is unwilling to step in and protect the community’s rights.

But after Shota started his advocacy work in 2011, he saw progress: the mining company agreed to install water filtration devices at manganese processing sites and to clean transport trucks before they pass through town. The City Council also passed an ordinance requiring transport trucks to cover cargo with a tarp.

Last year, the East-West Management Institute’s Policy, Advocacy, and Civil Society in Georgia Project (G-PAC) approached N-Map with a challenge: harness the visual power of video to help the organization achieve its mission. G-PAC encourages citizens to engage in the process of governance in Georgia by supporting policy advocacy and asked us to enhance the reach of their work—especially in marginalized rural communities—by producing a series of instructional videos.

With funding from United States Agency for International Development (USAID), N-Map theorized that we could employ the poignancy of visual storytelling—and the human narratives behind advocacy work—to show basic advocacy concepts and inspire citizens to take action. We produced a series of videos that profile successful advocacy campaigns in Georgia, giving successful Georgian advocates the opportunity to instruct others on how to engage with institutions of power. 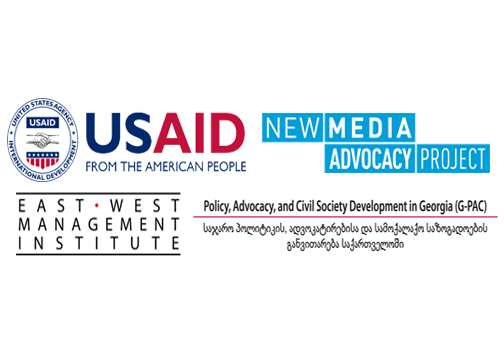